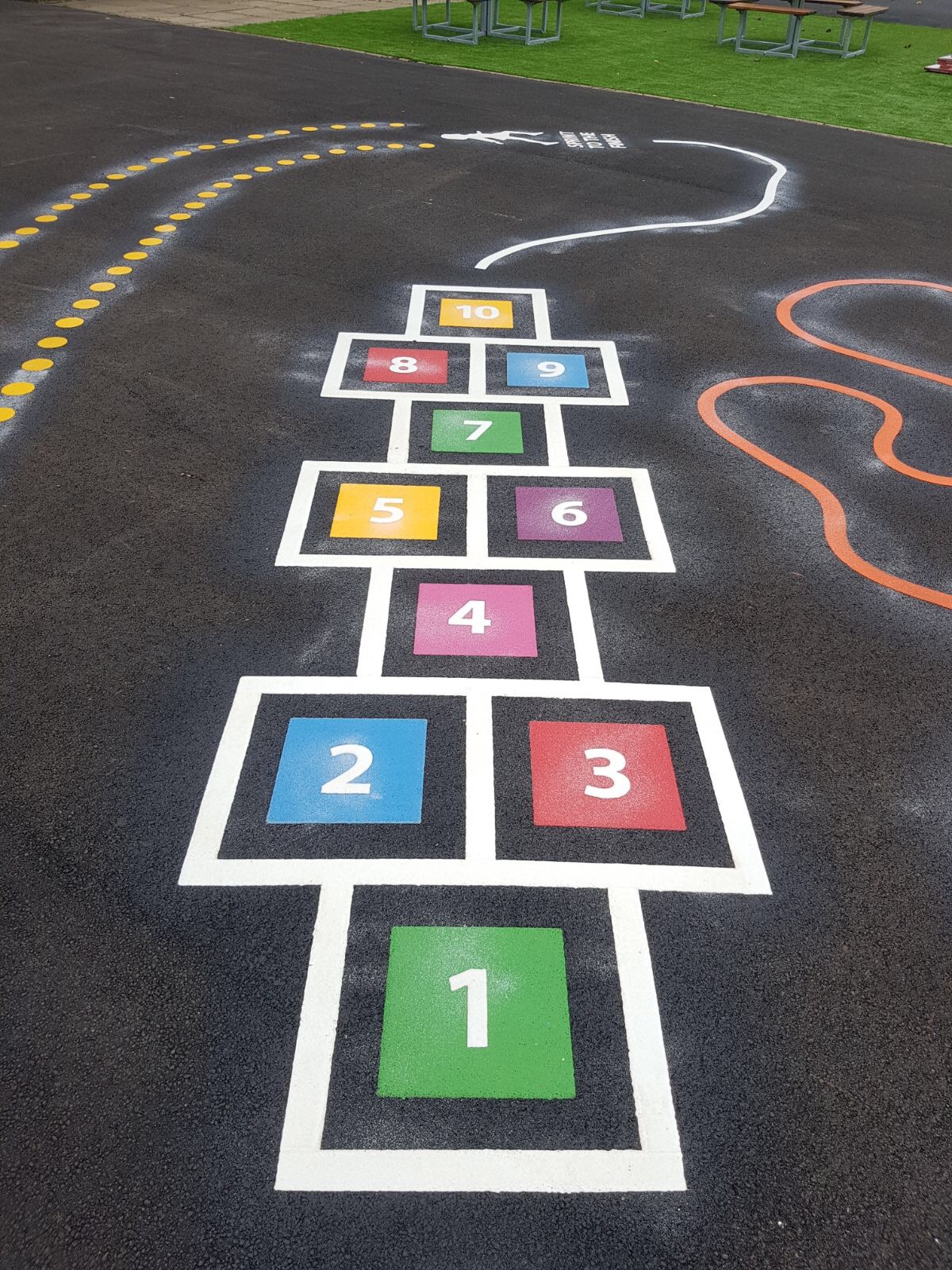 Hopscotch is a classic playground game which has some interesting origins. It first came to the UK during Roman times, though it is said to have originated in China. The game was originally a way for soldiers in the military to train their dexterity in full uniform and with heavy equipment on their back. (This style of training is very similar to how modern footballers practice their agility and footwork with thin rope ladders and tyres.)

Eventually, hopscotch made its way to the school playgrounds in the form of number games and grids, which is the same category in which you’ll find our very own hopscotch playground markings!

In most schools and nurseries the game of hopscotch can be played either by a single child or a group of children. The aim of the game is to hop or jump through all of the squares without touching any of the lines. Players must hop on one leg, unless the squares are side-by-side which means they need to land on both legs.

The game can be made more competitive by playing speed versions or having both teams go at the same time, to see which can complete the course first!

Pick and throw your marker

Each player needs a marker of some kind either a rock, stick, or some other object like a glove or hat to pickup when they return. Once every player or the group has selected a marker it’s time to start playing!

The easiest way to start is to have the youngest player go first. They should take the marker and throw it into the first square without it touching any of the lines. If it touches the lines or goes out of bounds they are out and it’s the next players turn.

In some variations of the game players must hop over the marked square or alternatively start as normal but pickup the marker on the return.

Once a player is successful they can hop on one leg or two where indicated until the course is complete. But, players must remember to avoid touching the lines! The game can be made more challenging by hopping on one foot throughout the course to the end of the first leg.

Players in traditional rules must only make one jump into the last double foot square (typically number 10). In order to be set up for the return journey, players must jump from the second to last square and spin 180 degrees to land in square 10 facing the starting point.

Typically, younger kids are allowed to land in square 10 normally then make one hop to face the right direction before proceeding.

After players have made it to the end of the course they must return back to the starting point in the same way. The only difference on the return journey is they must pickup the marker while balancing on one foot! It’s an exercise requires balance and patience.

If a player makes it back to the starting point with the marker then it’s the next player’s turn. And this repeats until break is over or until only one player remains – the WINNER!

Playground games, like hopscotch, are an important part of childhood mental and physical development. This simple game can help children develop social skills through team encouragement, improve balance by picking up the marker, mobility from hopping in the squares, critical thinking and problem-solving when hopping through the course.

Why not get a new hopscotch course for your school? You could personalise the game further by making your own school playground rules or have classes compete for the quickest time!

Our philosophy at Uniplay is “to see children of all abilities develop essential skills through play” and we specialise in the design and installation of thermoplastic playground markings, giving playgrounds colour and creativity to enhance play, fitness and fun. You can choose your favourites from our extensive range of categories, or give one of our friendly experts a call on 0333 321 6695 if you have any questions, or need any advice. We’re always happy to help!

During this uncertain time, we would like to keep our customers up to date with the steps we are taking to do our bit to prevent further spread of COVID-19. In line with Government advice,

How-to encourage self-awareness at your school

Self-awareness is an important part of childhood development, particularly in the primary school years, which will set the foundation for children to develop essential skills, like emotional intelligence and communication, needed to be successful at

What is creative play?

In the UK, there are 16 different widely recognised types of play. One of the most important types is called Creative Play, which can have an important impact on a child’s day-to-day experience and development.

At Uniplay, we specialise in innovative, fun, outdoor Thermoplastic Playground Markings for schools and nurseries.
Our thermoplastic graphics are designed ‘in-house’ by our talented team of designers, and precision cut to create the most exciting and innovative graphics available. Our designs are produced to support the social, physical and emotional needs of young people and stimulate exploration, fitness and social interaction.

Our installation teams have a keen eye for detail and are experts in ensuring our thermoplastic playground markings are fitted to the highest standard with minimal disruption to your school day. Once our fitters have completed the installation, your markings are ready to be used within 30 minutes.

To celebrate 10 years as the leading provider of thermoplastic playground markings and the launch of our brand new collection of playground graphics and sports games, Uniplay are delighted to be giving away a £2000 playground markings makeover. Simply request a copy of our new and exciting brochure and we’ll enter you into a draw to win a full playground installed free of charge.

UniPlay specialise in the design and installation of thermoplastic playground markings. We believe playtime is an important time and we give playgrounds colour and creativity to enhance play, fitness and fun. Our Philosophy is: “To see children of all abilities develop essential skills through play”, we do this by transforming playgrounds with our range of playground markings.

We have a fantastic range of playground markings designed to specifically improve communication skills. From langua… https://t.co/mWprlUYTdB

Using an eco-friendly approach, UniPlay specialise in the design and installation of playground markings. As we car… https://t.co/pyOMgrKrpX

If you would like to encourage activity on the playground, we are here to help! Our playground markings encourage a… https://t.co/geyErhusCB

We explore how schools can encourage physical activity whilst incorporating educational play with playground markin… https://t.co/Gnbx8KYWZg

We are pleased to share the launch of our brand-new website! Showcasing our fantastic playground marking designs, o… https://t.co/EsMMQeWKUu

RT @SAA_Show: We’re thrilled to have the team at @UniPlayUK down at the #SAAShow19 today. Visit them at stand 1040 to find out more on thei…